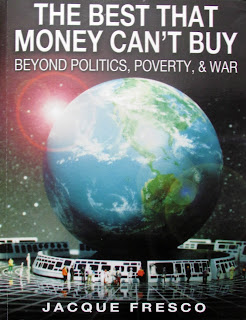 Jacque Fresco based in Amereica is a futurist, inventer and he is interested in human behaviour and how society functions. One of his key concerns is his belief that humans are shaped by their environments.

He is interested in creating a new society free from money were everyone is entitled to the basic necessities of life such as food, water and healthcare. Technology will be at the forefront as it will dramatically reduce human labour therefore allowing humans to focus their attention to more important aspects of life. To briefly summarise this new social and economic system would operate from a Resource Based Economy. Therefore he believes current and emerging technologies related to automation, energy, transport, archetectual design, agriculture and advances in health can be harnessed to create a better world that serves the well-being of each individual and the sustainability of the earth by taking into account resources available.

Quotes of interest taken from the book.

P32: Throughout history we have lived through ages characterised by wasted lives, in which the abilities of a great many have not been fully realised or utilised. Time, effort and minds are wasted on the pursuit of money in occupations that contribute nothing to the human intellect or condition.

P42: Throughout history, many innovators, artists and inventors have been ruthlessly exploited, ridiculed and abused, while receiving very little financial incentive. Yet they endured such hardship, because they were motivated to learn and discover new ways of doing things.

P81: You cannot identify the factors responsible for human behaviour through the study of individuals alone, but rather through a study of the cultures in which individuals are nurtured.

If you would like to discover more information about his research feel free to see the link listed below as there is a lot more detail involved in which I have not included in this post.

This book was a real eye-opener, the ideas presented may seem at first un-realistic or pure fantasy but knowing that he has dedicated most of his life to researching as well as testing these ideas is one reason to take notice and think about it.

I think personally living and operating in the present society is the norm just like drinking water, I was born into into and taught how to negotiate through it. It interesting to realise that an alternate social and economic system can potentially become a reality. It makes me realise the power of ideas and potential humans have and it re-aferms my own point of view that the constructed environment and the system it operates in is only as real as the idea, it is not solid and can be changed.

I think one main point of concern I have with the ideas presented is the heavy reliance on technology that could potentially make for example human produced art obserlete as machines would be able to do this instead of humans. I wonder how or if the Arts would operate or contribute in this vision of society.

On the other hand this book made me think about the potential art could offer in terms of producing well-being and learning within the built environment.

Posted by Martin Harman at 11:44 No comments: