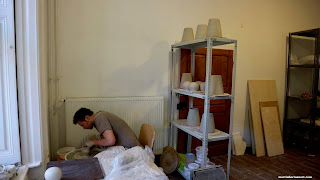 Throwing cones and spheres on the potters wheel. 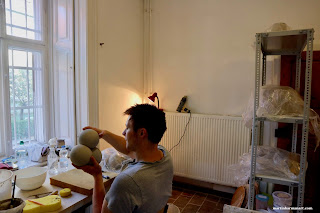 Joining the shapes together. 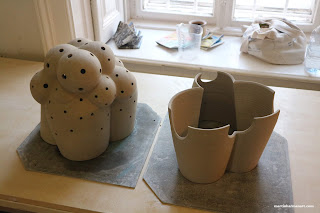 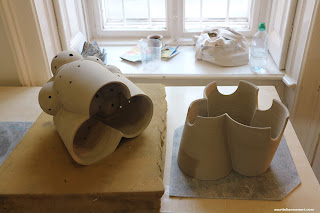 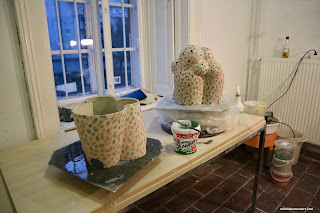 Applying the coloured slips with a paint-brush. 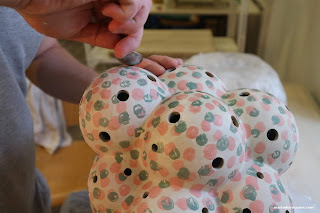 Burnishing the colour with a metal spoon to create a shiny surface. 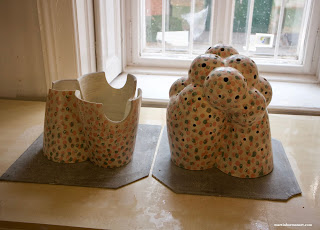 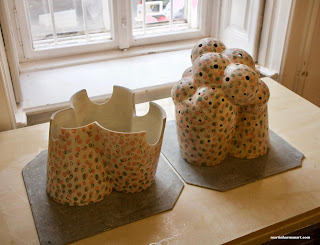 The completed forms ready to dry and be fried.

A full-on 10 days of making. Not a lot of time for other things like social media until now. Time has flown by quickly. I think like other events like this the schedule really forces me to work fast. From the start of this symposium I really have not had any time to think much about my actions, I have had to put my mind-set into constant making to meet the schedule deadline. This symposium is on for just over three weeks, so that is just over one-week making, one-week drying and firing, and the remaining days finishing and setting up the exhibition.

I used a white stoneware clay from Hungary to create the forms that were created from wheel-thrown components such as cones and spheres that were cut up and joined together. Coloured slips were applied to the outside, then polished with a spoon.

I am just going to let these two sculptures dry before putting them in the kiln for a single firing to 1230c. Again because of the limited time I am doing a single firing as I do not have the time to do multiple firings like I usually do. The process is quite similar to the making process I used in Germany.

The plan with these two pieces is to display them on their side so that the eye can observe the inside as well as outside of the forms.
Posted by Martin Harman at 23:25 No comments: 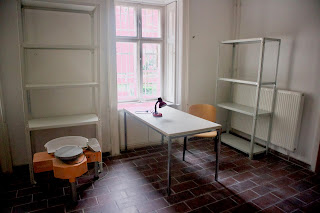 The Studio. I would like to think were ideas become reality. 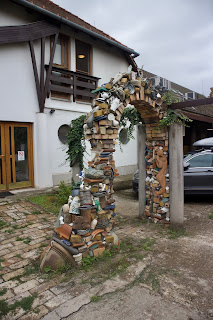 The arch. Reminds me of forgotten ceramic objects. 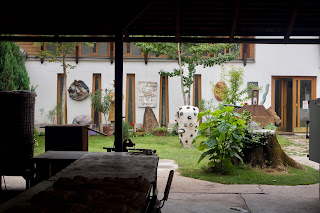 The Garden full of ceramic Treasures 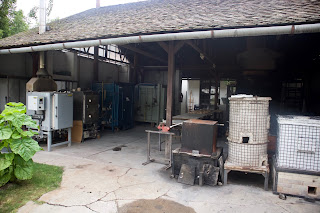 The Kilns. In some cultures people pray to the gods to ask for a successful firing, I don't know if that is the case for people in Hungary.

Just in the process of settling in and getting to know the studio such were myself and my wife will be working, the kilns, accommodation and all the other necessities.

We had a bit of time to go around the city and find some food as we will need to prepare our own. We have not had a lot of time to explore yet but looking on google it seems there is a lot to explore. Feel free to see: https://en.wikipedia.org/wiki/Kecskemét for more information about the city of Kecskemét.

If you are a artist working with ceramics feel free to check out the International Ceramics Studio, Kecskemét, Hungary website at: http://www.icshu.org/ics.html as they offer opportunities for artists to apply for residencies.
Posted by Martin Harman at 12:42 No comments: